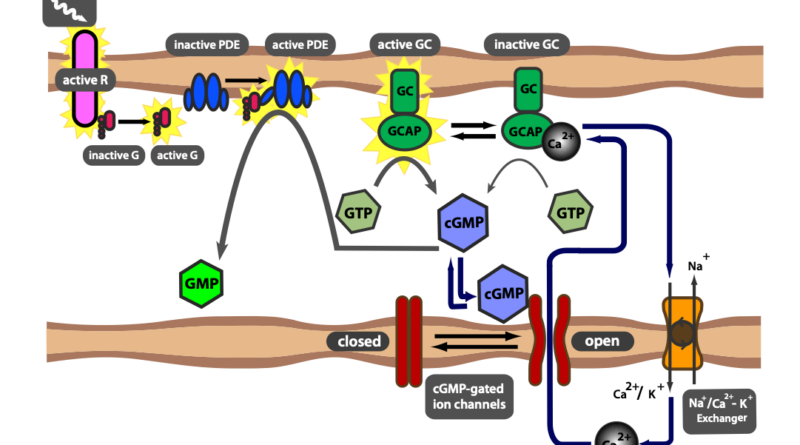 Implementation of a probabilistic inference by the biochemical mechanisms of phototransduction

When we perceive the external world, our brain has to deal with the incompleteness and uncertainty associated with sensory inputs, memory and prior knowledge. In theoretical neuroscience probabilistic approaches have received a growing interest recently, as they account for the ability to reason with incomplete knowledge and to efficiently describe perceptive and behavioral tasks.

How can the probability distributions that need to be estimated in these models be represented and processed in the brain, in particular at the single cell level?

We consider the basic function carried out by photoreceptor cells which consists in detecting the presence or absence of light.

We give a system-level understanding of the process of phototransduction based on a bayesian formalism: we show that the process of phototransduction is equivalent to a temporal probabilistic inference in a Hidden Markov Model (HMM), for estimating the presence or absence of light. Thus, the biochemical mechanisms of phototransduction underlie the estimation of the current state probability distribution of the presence of light. A classical descriptive model describes the interactions between the different molecular messengers, ions, enzymes and channel proteins occuring within the photoreceptor by a set of nonlinear coupled differential equations.

In contrast, the probabilistic HMM model is described by a discrete recurrence equation. It appears that the binary HMM has a general solution in the case of constant input. This allows a detailed analysis of the dynamics of the system. The biochemical system and the HMM behave similarly under steady-state conditions.

Consequently a formal equivalence can be found between the biochemical system and the HMM. Numerical simulations further extend the results to the dynamic case and to noisy input. All in all, we have derived a probabilistic model equivalent to a classical descriptive model of photransduction, which has the additional advantage of assigning a function to phototransduction. The example of phototransduction shows how simple biochemical interactions underlie simple probabilistic inferences.