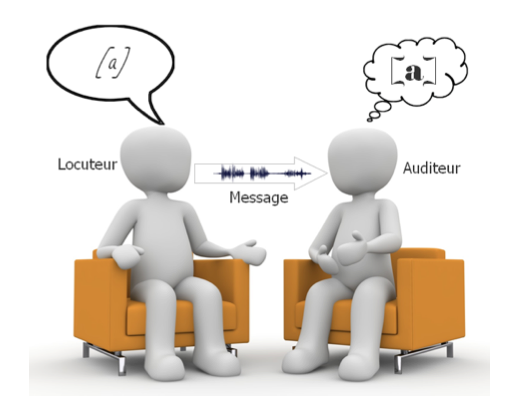 Studies in phonetics mainly focus on the second type of units. One of the main goal in this field is to understand how humans acquire and manipulate these units and how they are stored in the brain. In this PhD thesis, we address this set of issues by using computer modeling, performing computer simulations with a Bayesian model of communication, named COSMO (“Communicating Objects using Sensory-Motor Operations”).

Our studies extend in three ways.

In a second part, we investigate the variability of phonetic units. Despite the universality of phonetic units, their characterization varies from one person to another, both in their articulatory/motor and acoustic content. This is called idiosyncrasies. In our study, we aim at understanding how they appear during speech development. We specifically compare two learning algorithms, both based on an imitation process. The first version consists in sound imitation while the second version exploits phoneme imitation. We show that idiosyncrasies appear only in the course of a phoneme imitation process. We conclude that motor learning seems rather driven by a linguistic/communication goal than motivated by the reproduction of the stimulus acoustic properties.

In a third part, we investigate the nature of phonetic units. In phonetics, there is a debate about the specific status of the syllable vs phoneme in speech communication. In adult studies, a consensus is now found: both units would be stored in the brain. But, in infant studies, syllabic units seem to be primary. In our simulation study, we investigate the acquisition of both units and try to understand how our model could “discover” phonemes starting from purely syllabic representations. We show that contrary to syllables and vowels, consonants are poorly characterized in the auditory representation, because the categories overlap. This is due to the influence of one phoneme on its neighbors, the well-known “coarticulation”. However, we also show that the representation of consonants in the motor space is much more efficient, with a very low level of overlap between categories. This is in line with classical theories about motor/articulatory invariance for plosives. In consequence, phonemes, i.e. vowels and consonants, seem well displayed and likely to clearly emerge in a sensory-motor developmental approach such as ours.

Through these three axes, we implemented different versions of our model. Based on data from the literature, we specifically cared about the cognitive viability of its variables and distributions and of its learning phases. In this work, modeling computation has been used in two kinds of studies: comparative and explanatory studies. In the first ones, we compared results of two models differing by one aspect and we selected the one in accordance with experimental results. In the second ones, we interpreted a phenomenon observed in literature with our model. In both cases, our simulations aim at better understanding data from the literature and provide new predictions for future studies.